A lot of the discussions we have about what's fair to tax seem to refer to questions of how people should “share the pain.” I don't like the way that discussion usually goes, but not because I don't think people should share pain. I just question the definition of “pain” that seems to get used.

And I should say at the outset that frequently when this discussion of alleged pain sharing comes up, a flat tax gets suggested as well. For some reason this is often asserted to be more fair. I don't think it is. But I'm going to assume a flat tax for presentation purposes here because a lot of people don't seem to understand how to visualize our present progressive tax system. Doing so won't affect any of the points I have to make.

Let's begin by looking at how this sharing of the pain is supposed to work. We'll imagine three different incomes of different sizes. We'll assume everyone is paying a proportional amount of their income. 15% is often suggested as an ideal flat tax. But it made my picture hard to annotate. So I'm going to use 30%. Again, it won't affect my point.

So here are some typical incomes. The green indicates the take-home that you have, and the gray is tax taken out. The longer bars are people making more income. The shorter bar is someone making less income. But it's all proportional, so it's all fair—right? Well, we'll come back to that.

Now the discussion is about the current suggestion that we take out more tax on people who have very high incomes. That would look like this:

The argument is made by those who might stand to lose that they're already paying a huge amount of tax. And now we want more. Oh woe is them. Look at that giant red bite. In fact, look hard at it. Focus on it. Be hypnotized by it. Especially don't look at the green part to the left of it because if you look there, you might not feel like the person who's complaining is hurting so much. Just look to the red.

Actually, that's not the real argument I want to make. But it is one thing that should already have you thinking “Maybe proportionality isn't all there is to this picture.” Those pushing proportionality would be happier with this picture because they like the idea of shared pain:

There's another concept I want to introduce at this point. I'm going to call it the concept of “enough.” We can have a discussion later about what that line is. But wherever it is, the line of “enough” is what I want to define as the line where people can reasonably live. It supports sentences like “I don't have enough.” or “You have more than enough.” It looks like this: 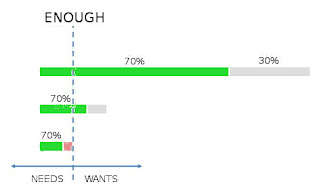 Right away, you notice that some people might not make enough. In this chart, everyone makes enough before taxes, but after existing taxes, one person is already hurting. I've marked that in red. And that's with the proportional tax. They had just barely enough, but merely asking them to participate in taxes meant they didn't have enough after all. I don't think people who make exactly enough or less than enough should have to pay taxes. It's a sham. If they're really not making enough, someone will have to help them—either another person or the government. Why take money away just to give it back? Unless people are making enough, there's no real money to take.

And if we want to add more tax, is that increasing the pain? Well, sure, for those who are not making enough. Because they're the ones whose needs are being cut into. Above the line of enough, I don't think it's fair to say you're experiencing pain in the first place, and unless the increase in tax causes you to cross the enough line, I don't think you get to complain about increased pain—or pain at all. 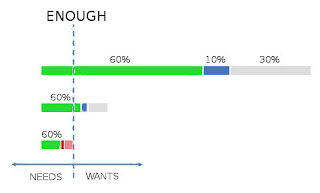 And this is the thing. Incomes scale but needs really don't. Oh, sure, we can all get used to having really big houses, vacation homes, jets, really nice clothes, etc. I think it's great to have things like that. But when you get to the point of not just having them but not knowing how you'd live without them, and not being willing to sacrifice some of that for the sake of others who are truly needy, you're pushing a line with me. Certainly, at minimum, if you claim to be experiencing pain because you don't receive money at quite the lavish level you've been used to receiving it, you've lost all touch. It's time to be reminded that you're behaving like a spoiled child and to be told that you should be ashamed.

Proportionality doesn't work without exemptions for the low end. That's why we have a progressive tax system.

And sharing the pain equally is meaningless because we're not all in pain. If you're making enough, at least have the courtesy to acknowledge the fact. You're not showing yourself in a flattering light when you behave like you're hurting if you're not. The world has bigger problems than your imagined pain.

Originally published August 10, 2011 at Open Salon, where I wrote under my own name, Kent Pitman.

Posted by netsettler at 3:00 AM No comments: