Twitter is not a tool for publishers. It is a tool for readers. Its value is that it fights the overall trend of the Internet, to make publishing too easy. It forces people to edit relentlessly, to make things fit. That value is destroyed by giving people a comfortable amount of room to publish without thinking.

Every other forum on the network wants to allow enough space for people to say what they want, to publish what they want. This is fun for people who think they have something to say, but it's not fun for people listening to them. I fear that the people who love Twitter, who find it a fabulous tool, are not going to be happy in a world that removes this impulse.

It's not that I don't sometimes wish I could say more, but I have respected that there was a reason not to. But now there is a pressure to change. And I've been pondering how to strike a balance between just digging in with the #Twitter140 crowd and blindly accepting #Twitter280 as the answer.

A proposal of sorts 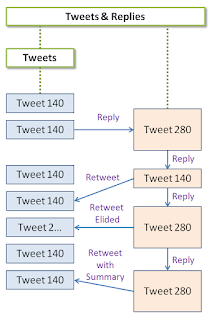 It occurs to me that the central feature of Twitter is the main feed. This is a stream of elevator pitches, bids to readers to care about a topic. This is what I think must be preserved. I don't know that I would have picked 140 characters. I understand its arbitrariness. And yet it has worked well. I just don't think 280 characters is needed there. I'd like not to disturb that. I want people to think hard about how to present an idea, so that as a reader I will see a stream of crisply edited ideas.

But when I see an idea that someone has thought carefully about, I want to respond sometimes in detail. I may not have a lot of time to spend on my reply, not as much as they should have in opening the conversation. But then again, anyone reading that particular topic must be caring about the topic, or they wouldn't have clicked in. So it seems reasonable for replies to be slightly longer, perhaps 280 since that is the proposed amount. I think I'd be OK with 280 character replies.

But what if someone wants to retweet those? If they've been sparing in their reply, keeping under 140, they should simply be retweetable. But we could have different operations for retweeting longer replies. We could have "Retweet Elided", which would put in an ellipsis (…) as the 140th character. Or we could have "Retweet with Summary", where it was the job of someone retweeting to summarize the response in a way that points through to the underlying post. I'm sure they could come up with a way to visually relate these in a way that respected the main feed and allowed one to see the summary and expansion if the reader wants to click through.

I think this kind of hybrid approach, which retained the 140 character feed and allowed for more expansion in the meat of a conversation, would continue to offer Twitter value. But I think they're on the brink not of finding an answer, but of losing their essential character. That would be very sad.

Posted by netsettler at 8:25 PM No comments: