In 1990, I visited Marriott's Great America and rode on the ride called The Edge.

It's a thrill ride designed around the notion of free fall.

The basic idea is that you get into a steel cage and they drop you on a track. Initially you just fall but the track is curved so it gradually takes your weight back and slides you down to where you end up landed on your back. The ride accelerates from 0 to 60 miles per hour in 1.8 seconds, hitting 3.5G, and then decelerating in 5 seconds back to a stop.

I'm not really a roller coaster person, so I'm not sure what was in me to do this. 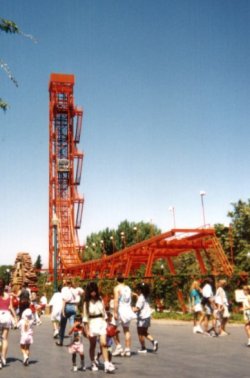 I'd usually be the one getting up to the door and then taking that conveniently placed exit for people who chicken out at the last minute. But that day I got in. And the door clanged shut.

Now the thing to note is that just about as soon as I was in, I was thinking “No, maybe not.” But the problem is that by that time you're locked into a steel cage and there really just isn't any backing out. At that point, there's just physics and destiny waiting. No more control. The cage was going down whether I liked it or not, and there was no more time to think.

It came out fine, as it happens. Since then I've had other chances to repeat the experience, but I don't do it any more. Been there, done that, got the t-shirt, as they say.

Still, I'm glad I once did. Sometimes other things happen in my life, or in the lives of others, where there's very little control. It gives me a framework to understand the sensation I'm feeling, or to empathize with the feelings of others.

There are times where in an instant, life changes and there's no looking back.

Some years later I was sitting with a friend at her house when her dog decided, pretty much out of nowhere, to jump up and sink his teeth into my face. One moment we were just sitting there amiably chatting, the next I had a dog—a Jack Russell terrier, if you're curious—hanging off the front of my face, teeth sunk into my upper cheek. It was really kind of bizarre and disconcerting. 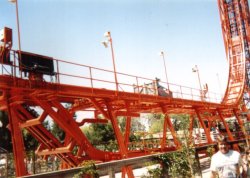 I think it disconcerted the dog, too. He seemed kind of embarrassed about the incident after the fact. I remember thinking to myself that I was probably going to be disfigured for life, like the clanging of that door.

As it happened, we went to the ER and they didn't even want to do anything with it—they said it would heal on its own. It had by some amazing quirk of fate missed all the nerves he could have injured. One or two people have noticed there are some tiny scars but there really hasn't been any observed problem. Just lucky. Like the ride coming to a smooth glide at the end. That time, anyway.

Still, one never quite knows. Life always has new challenges waiting. And always the sound of that clanging door. One way only, please, just forward.

Originally published May 28, 2009 at Open Salon, where I wrote under my own name, Kent Pitman.

I can explain now that I wrote this on the eve of a major surgery. At the time, I didn't want to worry friends about the surgery, so I wrote in metaphor and figured if something happened and the surgery didn't go well, at least people could figure out after-the-fact what I was thinking going in. Fortunately, it went well, and I'm a lucky cancer survivor, so I realized today I should add an annotation to connect the dots on the history of this.

I also wasn't sure at the time whether it was safe to talk publicly about my cancer. I talk more about that in my article The Big C. Health, privacy, and politics come together in complex ways. I might have wished that such an important and personal thing could stay private, but political change often demands the sacrifice of intimate information to sway minds. See that article for more detail.

Posted by netsettler at 3:00 AM